Yes I have used it and  I will explain it according to my understanding.  PDF to PowerPoint Converter is  mainly used in the convertion from pdf to other forms of documents which can be resaved from PowerPoint, such as  mhtml, pot, potm and so on so forth. It was developed by VeryPDF whose  software products have been widely used in many big companies.

“Flow text with the text” means that converted  PDF files to editable PowerPoint presentations, with all the original text, images, graphics, layout and formatting exactly preserved in the converted PPT documents; The text will be around by the text boxes. You can edit it like the other kind of text boxes. You can adjust the character’s size, color and other thing. You can drag the whole text in the box to any part of the PowerPoint. It also can cover on others text. I will show you by pictures. Maybe you can compare “the original converted pdf in the PowerPoint ” file and “the adjusted converted pdf in the PowerPoint ”, then you will have clear understanding of the function of the “Flow text with the text”. 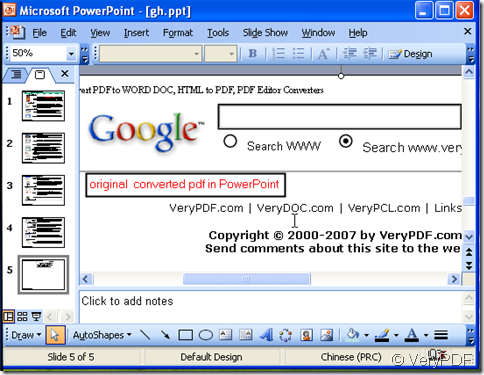 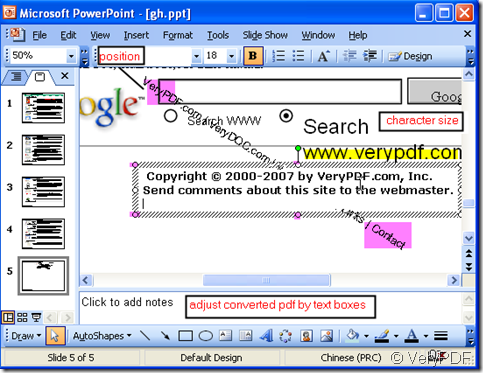 This special function is more  advantageous for those who want to change the original  pdf file style but also want to keep its original  content.

One thing I need to be pointed out that not all the Office working system can show like this. At first, I used Office  201o but it failed to converted the pdf file. Nothing was shown in the PowerPoint. You’d better use the ones PDF to PowerPoint Converter  supports.