CIN is an image file format used by Kodak. Kodak’s Cineon film system created CIN files to transfer films to digital format for electronic compositing, manipulation and enhancement and  then transfer the digital files back to a film with no loss of image quality. You can use  Adobe Photoshop and XnView to open and edit CIN files. However, when you use VeryPDF docPrint to create high quality CIN files from Word document, you do not need any other software like Adobe Photoshop and XnView, because VeryPDF docPrint is independent.

The following part of the article will show you how to create high quality CIN from Word documents.

First, open the document you want to convert from Word to CIN in MS Office. 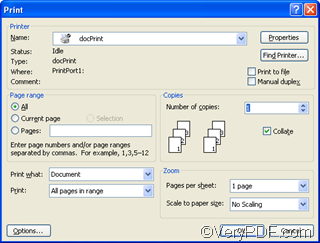 Third, choose docPrint as the printer in the Name combo box of the Print dialog box as illustrated in the figure above, and then, press OK to open the docPrint dialog box as illustrated in the figure as following. Now you can view the document you want to convert from Word to CIN files. It means, you have successfully input the Word document to VeryDPF docPrint. 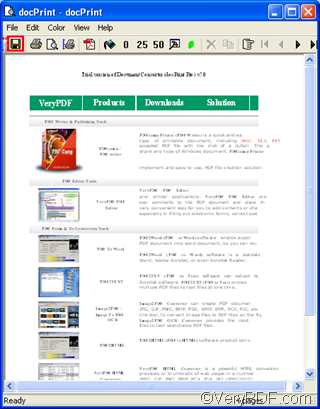 You can repeat the first three steps to add all the files you want to convert from Word to CIN files.

Fourth, in the docPrint dialog box, press the disc icon as marked by the red rectangle below to open the Save As dialog box. 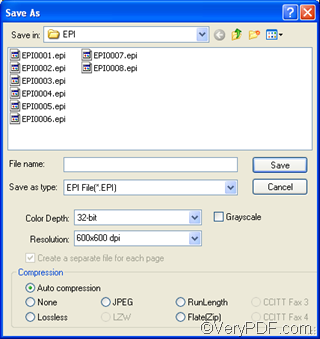 Fifth, set color parameters to get high quality CIN files. You should choose 32-bit as the Color Depth, and 600*600 as the Resolution.

The last step, save the files in CIN format. You should select the directory to store the new CIN files in the Save in  combo box and list box; > type the original name for  the outputting CIN files in the File name edit box. When there are many outputting files, the computer will automatically generate the names for CIN files by adding numbers like “0001” after the original name . For instance, of you type “Very” in the File Name edit box, the first file created will named as “Vert0001”. > Choose CIN File(*.CIN ) in the Save as type combo box; > press Save to create  high quality CIN from Word documents. 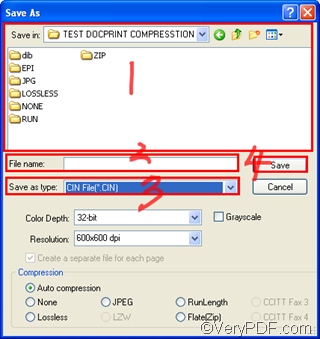 After the six steps, you can create high quality CIN from Word documents.  To learn more about how to use docPrint, you can read articles at https://www.verypdf.com/wordpress.