To use the tool, please download the software at https://www.verypdf.com/artprint/index.html#dl and install it into your Microsoft Windows Operating System. You will find an executable file named “doc2pdf.exe” in the directory where docPrint Document Converter is installed (for this case, “C:\Program Files\docPrint Pro v5.0\”). This executable file will be called by the command line program, “cmd.exe”, for converting documents in the examples below.

Right click on “My Computer” icon on your Windows OS desktop –> Choose “Advanced” tab in activated “System Properties” dialog –> Click “Environment Variables” button –> In group box of “User variables”, choose variable “PATH” and press “Edit” button –> Add the path of doc2pdf (“C:\Program Files\docPrint Pro v5.0” for this case) to the end of “Variable value” in “Edit User Variable” popup dialog box and press “OK” button –> Press “OK” in the “Environment Variables” dialog and “OK” in the “System Properties” dialog. Now doc2pdf.exe must be able to run in any directories (if it still can not be called in other directories, your might need to reboot your system to try again).

Below are some examples of converting documents of doc to pdf using docPrint Document Converter command line tool, doc2pdf.exe. The basic usage of doc2pdf.exe is “doc2pdf –i <name>.<format>  [-o <name>.<format>]” where the argument string following option “-i” points to the source document and the string following “-o” specifies the target document name and format. Here is the command line of a practical example,

The whole process is presented in the following screen snapshot.

The option “-o” for specifying output parameters is optional to be omitted. Using a command line omitting the “-o” option like

will lead you to a graphic interface, “Save As” dialog, for specifying the output parameters presented as follows. In the dialog as the snapshot shows, you may specify the output file path in “Save in” combo box, the output name in “File name” editable combo box and the target format in “Save as type” dropdown list. In the end, press “OK” button to finish the conversion. Your have to complete all the operations in no more than 300 seconds, otherwise the conversion will be aborted automatically and need to be restarted. 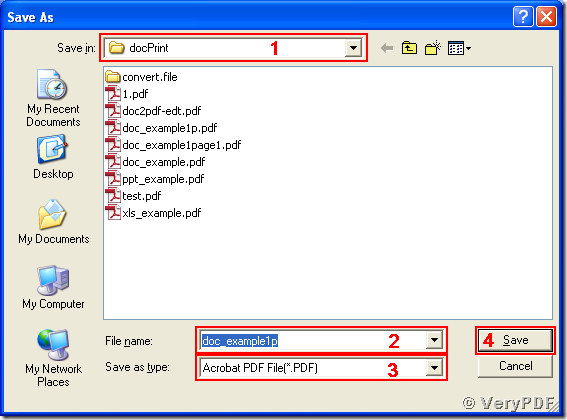 The docPrint Document Converter command also supports batch conversion from more than one documents to one target format. An demo command line is

which converts all the doc documents in the current directory to pdf format and saves the target files in the same directory using their original names. The next screen snapshot of Windows Explorer presents that the three documents are converted from doc to pdf. For batch conversion, the “-o” option can NEVER be omitted in the command line. 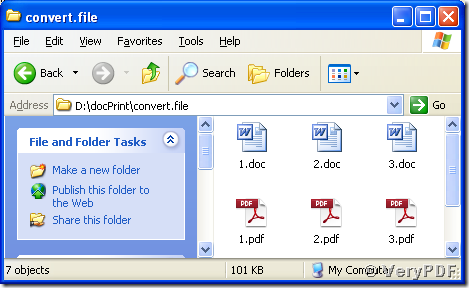 There are much more supported options and arguments for docPrint Document Converter Command Line tool, and more details about these parameters and their usages are accessible at https://www.verypdf.com/artprint/document-converter/help.htm.