You must hear of the saying that no star is out of reach.When the task rotating the page while converting emf to png comes to you,you must believe that you can do it perfectly with the help of HTML Converter Command Line which is a powerful tool to fulfill the work in a very short time.You just need to input some DOS command line and click the “Enter” button to run the conversion of emf to png.Maybe in no more than 2 seconds,you can get your target file with any name in any location of your computer according to your will.

You can download HTML Converter Command Line at https://www.verypdf.com/htmltools/htmltools.zip, then save and unzip the software in your computer.Then you can see an executable file in the installation folder of HTML Converter Command Line named htmltools.exe which is the called program in the conversion of emf to png and you should use it later.

The next part are the steps to describe the process of rotating page when converting emf to png.

You can click “start”—“run” and input “cmd” in “open” edit box of the popup dialog box,then click “OK” button.Please see Figure1 and Figure2. 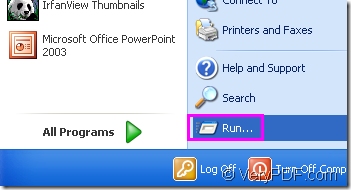 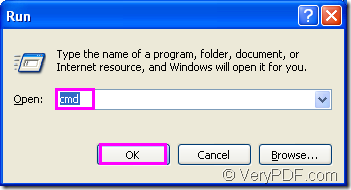 The command line is supposed of four parts—called program which is htmltools.exe mentioned above,parameter which is used to rotate the page,source file which needs to be converted and the target file which is the one you want to get.Please see the following basic structure which you can refer to when you write your own command line in cmd.exe dialog box.

(1) htmltools.exe  stands for the called program.

(3) “input.emf”  stands for the source file—the emf format file in your computer.

(4) output.png  stands for the target file.

The next example in Figure3 is the application to the command line structure above.

(3) "C:\Documents and Settings\admin\Desktop\test0001.emf" is the path of source file.

Here please pay attention.You don’t need to input the long paths of called program and source file letter by letter,just drag the file you need into cmd.exe dialog box and you will see the whole path accurately.

(4) test.png  is the name of target file which can be set freely by you.