VeryPDF docPrint PDF Driver printer, as a virtual printer, can help you to convert any printable files like a Word document to Postscript file. docPrint PDF Driver printer is contained in many VeryPDF products like docPrint, docPrint Pro, and PDF camp. This PDF driver is able to print any printable files to documents in various formats like Postscript, EPS, PS, TIFF, and PDF. You can download the free trial version of any VeryPDF product like docPrint from the following website: www.verypdf.com .

1. You should open the document you want to convert from Word to Postscript in any MS Office application like MS Word 2010. 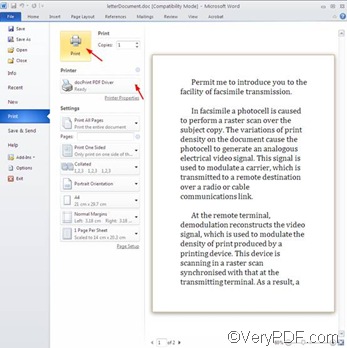 3. Click the [Printer] combo box and select [docPrint PDF Driver] on the pulling down listing. Then, move your mouse up to click on the [Print] button as illustrated to open the [Save As] dialog box, which will appear in several seconds later, depending on the size of the original document. Even if it is the [Print] dialog box appears on the screen, you should do the same: select [docPrint PDF Driver] as the printer, and click a button like [OK] to proceed to the next step. 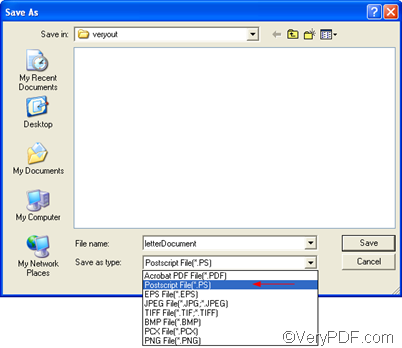 The four steps above are useful for you to convert a Word document to Postscript format via docPrint PDF Driver printer quickly and easily. If you want to get more information about other VeryPDF products by visiting the following website: www.verypdf.com