You can also call docPrint Document Converter Professional as docPrint Pro for short. There are three available applications in docPrint Pro, which are GUI application, command line application and virtual printer application. This article aims at showing the method of converting word to pic format file with the virtual printer docPrint, which is a Windows printer driver that saves ink, paper and time by controlling printed output, it supports print 2, 4, 6, 8 or 16 pages on a single sheet of paper, it also supports scale A0, A1, A2, A3 papers to standard Letter or A4 paper sizes. docPrint is easy-to-use, just print a document to "docPrint", you will be able to start using Document Printer software.

You will get some useful information about the steps to convert word to pic in following contents.

1.You should run the printer driver in your computer when you open the word document. Just click “File” and click “Print” in dropdown list, you will see “Print” dialog box. Just choose “docPrint” as your current printer in “Name” combo box and click “OK” button. Please see Figure1. The dialog box can be opened by the quick way such as the hot key “Ctrl”+ “P”. If you have set docPrint as your default printer, you can right click the word document and click “Print” option to run docPrint directly. 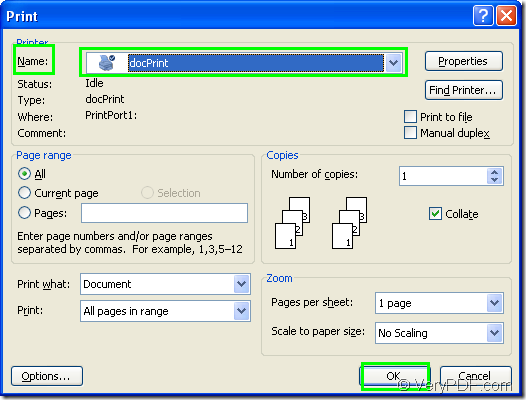 2. Then you will see a dialog box showed in Figure2 called “docPrint” in which you can open “Save As” dialog box to save your target file and run the conversion of word to pic. You can take the following ways. You can click “File” and click “Save as” in dropdown list or click the icon

which looks like a floppy disk in the toolbar. You can also use the hot key “Ctrl”+ “S” to open it. 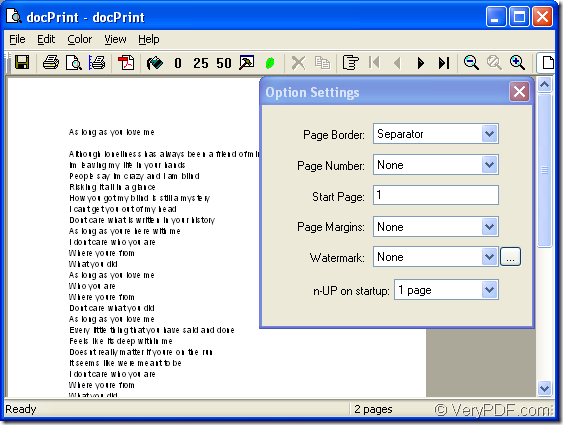 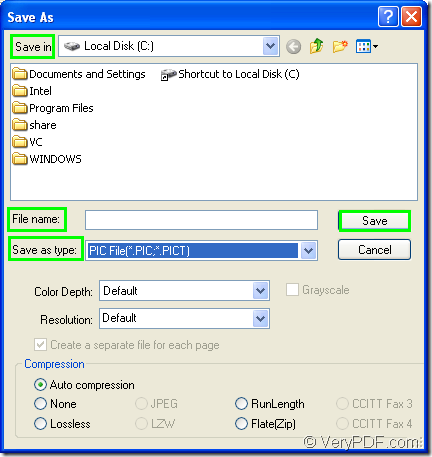 It will cost you not too long, maybe only several seconds. The conversion speed depends on the file size and the computer configuration. But usually, the speed is fast enough just like a blink.