You will see how easy the process of the conversion of doc to pcd is with the help of the powerful tool—docPrint Document Converter Professional in this article.

If fact, the application to be showed in the conversion of doc to pcd or docx to pcd is docPrint which is one part of docPrint Document Converter Professional. docPrint is a virtual printer which can save ink and paper. It is also a document converter which can bu used easily.

To use docPrint, you should download docPrint Document Converter Professional at https://www.verypdf.com/artprint/docprint_pro_setup.exe and install it on your computer according to the installation wizard, which is an simple process.

The following contents are the steps to convert doc to pcd.

In this step, you can open a word document first, then click “File” and click “Print” in dropdown list to open a dialog box called “Print” in which you should choose “docPrint” as current printer in “Name” combo box. Then click “OK” button. The “Ctrl”+ “P” combination is another way to open “Print” dialog box. You can also right click on the word document and choose “Print” option to run the printer if docPrint is the default printer.

The “docPrint” dialog box will pop up next. Please see Figure1. You can see there are some icons in the toolbar and a small dialog box called “Option Settings” on the right. You don’t need to care about them if you want to convert doc to pcd only. Please cut to the chase to open “Save As” dialog box according to the methods below. 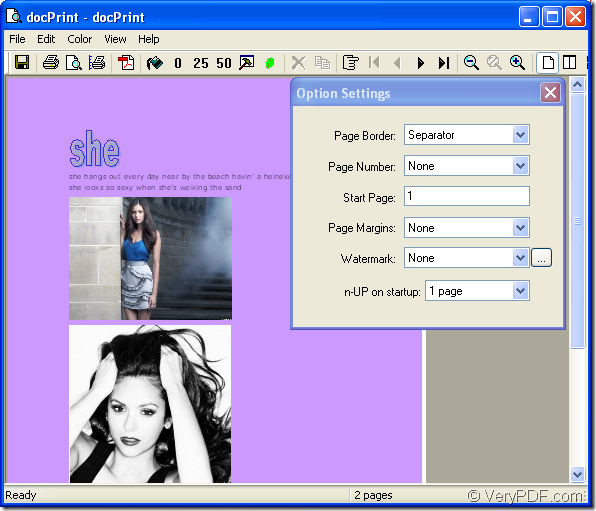 in the toolbar is useful, too. 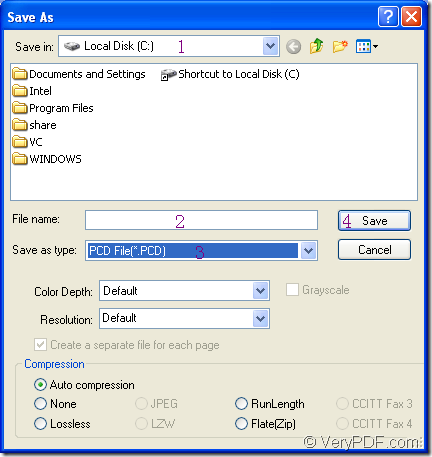 1. In “Save in” combo box, please choose a suitable location for the target file.

2. In “File name” edit box, you should input the name for the target file.

3. In “Save as type” combo box, please specify the output format for the target file.

4. Click on “Save” button to save all the changes you have made.