The command that can be used to set PDF producer is -producer <string>. The angle brackets are used to enclose essential contents. string refers to character string. And the character string must be enclosed by quotation marks “”. If you want to convert a single document from RTF to PDF, you can enter the directory of the selected file. If you want to batch set PDF producer and batch convert RTF to PDF, you can use the wildcard * to replace the file name. For example, the command line in the command prompt window below can be used to set PDF producer as “verypdf” and convert RTF to PDF in batch.

When you press “Enter” on the keyboard, the computer will begin to batch set PDF producer and batch convert RTF to PDF without delay. When you see “result =OK” displayed in the command prompt window as illustrated above, it means that one file has been converted from RTF to PDF. Then you can open the PDF Properties dialog box to view the result. The following Properties dialog box is an illustration of the PDF producer. 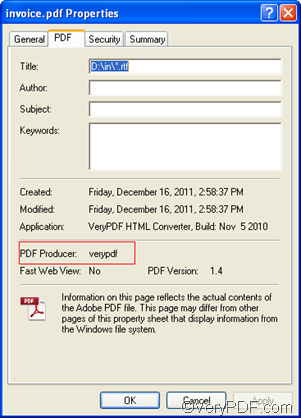