Open a browser such as Firefox, type the URL and visit web site. Then, you can save the web page as a format like HTML as follows: click the “File” on the tool bar; > select “Save Page As”; > When the “Save as” dialog box appears, select a directory in the list box; > enter the full file name including the file extension like HTML in the “File name” edit box. > Click the “Save” button. For example, this article saves the web page on disk D and named it in.html. 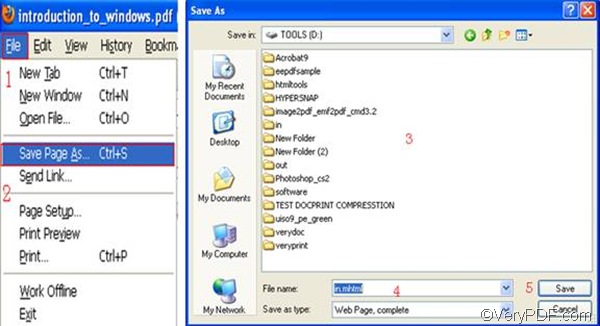 Taking the following command line as an example, it can be used to set “pdf producer” as PDF producer and convert URL to PDF. All the directories and the character string in the command in the example can be replaced.

The computer will begin to convert URL to PDF and set PDF producer as soon as you press “Enter” on the keyboard. When you see “result =OK” displayed in the command prompt window, that means the computer has accomplished conversion. Then you can check the PDF producer in the “Properties” dialog box of the PDF file. which can be opened in the following way: right click the icon of the result PDF file. >Then, select “properties” from the drop-down menu to open the “Properties” dialog box.>Click the tab “PDF” in the dialog box.