If you want to protect the copyright when you convert WMF to PDF, you can set PDF producer via command line. The whole process will take only four steps. Producer is one of the properties of a PDF file. When people want to know or to tell the readers who created one PDF file, they will set PDF producer. You can find the producer information by right clicking the icon of the result PDF, > select “properties” on the drop down listing to open the Properties dialog box.> Then click the tab “PDF” in the dialog box as illustrated below. Then, you can find the PDF Producer information under the edit boxes. 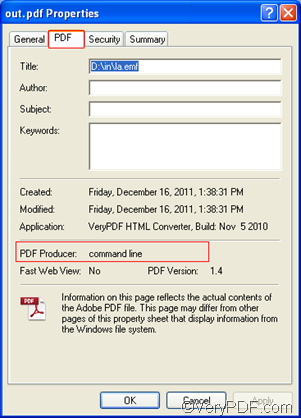 The rest part of this article will show you how to take four steps to set PDF producer and convert WMF to PDF.

Once you press “Enter” on the keyboard, the computer will begin to set PDF producer and convert WMF to PDF without delay. When you see “result =OK” displayed in the command prompt window as illustrated above, it means that the conversion from WMF to PDF is finished. Then you can open the Properties dialog box to view the result. As you can see in the following illustration, the PDF producer is “verypdf command line”. 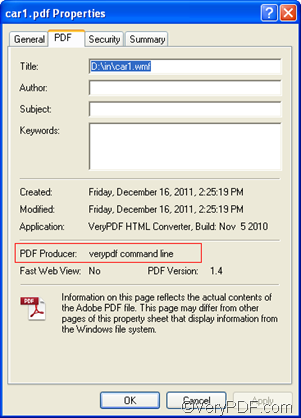