I'm trying to find out if this is possible, and if so how to do it. From a machine running XP or Vista, as I understand it, when you send something to print, Windows/the print drivers render the file into a format the printer can read and understand (a spool file?). This file is sent to the printer then the local copy is deleted. I believe this file is held briefly in the 'C:\WINDOWS\system32\spool\PRINTERS' folder, which is effectively the shared print queue folder. for all printers on that machine.

My question is whether you can capture this 'raw' spooler data (I've managed to copy and paste to capture the files that appear in the spool folder, but you have to be fast!), and crucially, once you've captured it, can you then somehow send it to print again?

I have a feeling this is more complicated than I think. Presumably there are different formats of spooler data etc.? Is there a utility that can do the printing/viewing of captured files?

2. when an user print a document to any Windows Printer, Printer Hook Control will capture this print job and redirect it to docPrint Virtual Printer,

The following is the simple workflow, 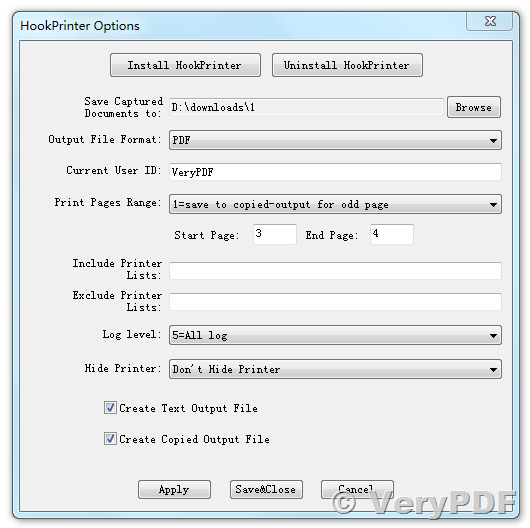 Can I forward and redirect print jobs from one printer to another in windows?
https://www.verypdf.com/wordpress/201607/can-i-forward-and-redirect-print-jobs-from-one-printer-to-another-in-windows-42706.html