Sir, I want intercept and capture a print job and convert it to PDF & Plain Text & Image files and then print, I want a C# code for the same, could you please share? In case it is available in paid version we would go for it.

We have created an evaluation version of docPrint Printer Capturer to you, you may download it from following URL,

"-hookprinter" option will capture everything that you sent to any Windows Printer. If you want just print a document to docPrint first, and then forward to other printers, you can use "-forward-options" option, for example,

After you set the options, click "Save&Close" button to close this dialog, when an user print a document to docPrint, docPrint will redirect the print job to predefined printer properly.

As per you provided solution I have used method #2 as given in below email; followed all the step that is mentioned over there.

After successful installation of exe I got your virtual printer name docPrint Printer Driver in printer list.

Though It is successfully saving the printing document in PDF at my location but printing got stopped after saving this pdf file. this means that nothing is printed after using this docPrint Printer Driver.

Please do assist what setting I have to do in this case so that print will continue as well as saving the printing document at location.

Do also let me know the pricing details of this software so that I can use the same for my own purposes.

after you install it, you can run following command line to setup "Printer Redirection" options, 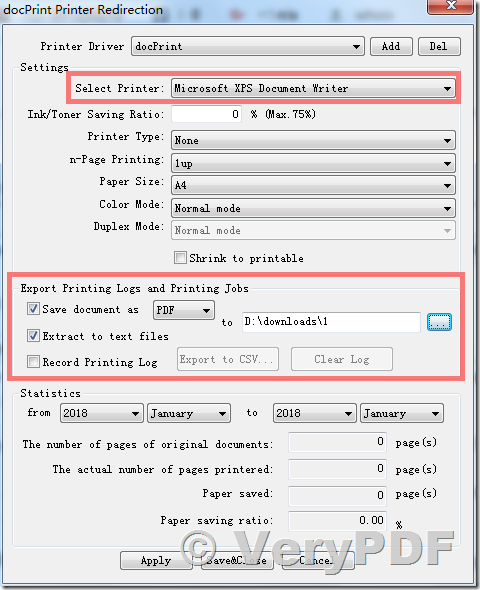 Please check "Save document as PDF" and select an output folder to save the PDF files, click "Save&Close" button to close this dialog.

Now, you can print a document to docPrint, docPrint will save the PDF file to output folder and also forward the print job to target printer properly.

We hope "-redirectprinter" option will work better for you, please give it a try.