Q: Is there any way to intercept print jobs on network or local printer?

Is there a way to monitor the print queue (before it gets to the print queue) and make sure that a particular user is only printing specified number of copy of a document? I want to find out how many copies of printout particular user had taken to maintain a record of this. How can I do that using Java Code or any other programing language?

I want to intercept print jobs and log them so I can do charge backs to the person/department doing the printing. Later on, I would also like to add a watermark based on the destination printer and other factors.

I've looked through System.Printing and found ways to get the current jobs.  However, I don't want any chance of missing a job because of some delay.  So I'm trying to find something that sends me notifications. Can someone point me in the right direction?
---------------------------------
Q: How to Intercept and modify print jobs?

I need to apply some modifications (mostly replace some text a la s/foo/bar/) to everything that gets printed from a specific Windows application. My guess is that most of the building blocks that can be used for this are already available somewhere. My idea is to proceed as follows:

* A (fake) network printer is advertised (e.g. from a Linux host)
* Instead of printing, the communication (in PostScript, say) gets intercepted
* Things like compression get undone, the result is fed to ...
* ... a script I write that performs the needed text substitutions
* The resulting postscript is transmitted to the real printer

Is my idea feasible? And am I right that everything except step 4 should be available from basic tools? If so, could someone shed some lights on how I could really do this? I know too little about the internals of Windows/Linux network printing, CUPS and Samba and whatnot to feel confident how to proceed ...
---------------------------------
Q:

We need a program/process developed which should silently be able to capture all the plain text (excluding any images) from any print job that is being sent for printing to any of the multiple printers installed on the system (even if the printer is a shared one on a Local network OR a generic/text printer OR OPOS printer).

The data should be written into a text file and saved at the provided location. The Data should be printed to the printer without any loss of data and format. The captured text file should be in the exact same format as it would be printed. The process should be completely silent. It needs to be developed preferably in C# .NET framework 2.0 or above, should work both on Windows, Linux.

This is part of a project to integrate multiple point of sale systems running in an organization. The documents whose data is to captured would be primarily customer receipts and agent coupons. The process needs to be silent in order not to interfere with the business processes of the organization. The integration of the data from multiple POS must be done as seamlessly as possible.

Please note: The default setting of a printer is to use the spool but there is also a sending Print directly to the printer. Process should be able to capture text in case of both, spool and direct printing!

It should be able to capture text from the print job irrespective of how and from which source the print has been sent. 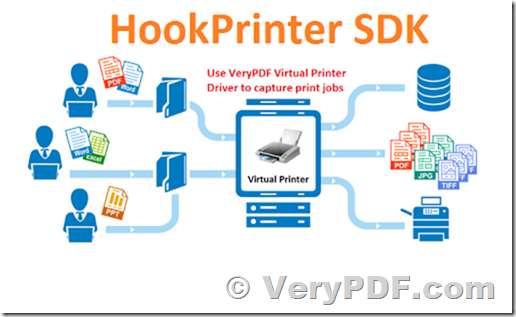 after you install it, please run it and active the HookPrinter SDK, HookPrinter SDK will add a layer between Spooling System and Physical Printers, such as,

VeryPDF HookPrinter Layer is a new layer be inserted between "Spooling System" and "Physical Printer", so it could intercept all print jobs, you can get all information from captured print jobs (*.SPL) files easily.

VeryPDF HookPrinter is a Windows product, it supports Windows system only, it doesn't support Linux system yet.

With VeryPDF HookPrinter product, you can Capture Printer Output to a File easily, you can also capture SPL files from printer driver for review and debugging purposes.