Now there are a lot of graphics editing software which can browse and edit the pictures more beautiful or practical.There are more and more people can operate these software such as a powerful one which everyone knows something about it—Photoshop.So editing pictures are very popular,fast and easy to learn.If there are some information in a webpage which is hard to edit,you can convert the url to picture for better operating.(Not convert the link to picture,but convert the information at the link to picture.)

Please download HTML Converter Command Line at the link https://www.verypdf.com/htmltools/htmltools.zip. You will find the software is a zip file when just been downloaded and needs to be unzipped in a suitable location of your computer.After that,you can see there is an executable file named htmltools.exe in the folder of the software.It is the called program of the conversion of url to picture,also the most important role in the conversion.

HTML Converter Command Line needs to be registered if you don’t want some functions are disabled.So please run cmd.exe by using the hot key “Windows”+ “R”  to pop up “Run” dialog box and input “cmd” in “open” edit box,then click “OK” button.Change the current directory to the installation directory of HTML Converter Command Line in cmd.exe dialog box with the command “cd” and end with “Enter” button on the keyboard.

Start to convert url to picture.

You can use the way mentioned above to open cmd.exe dialog,of course you can use the regular way.Just click “start”—“run” like Fiugre1 and input “cmd” in “open” edit box and click “OK” button like Figure2. 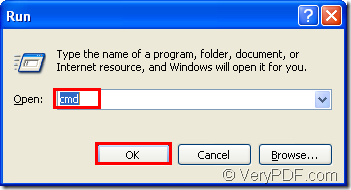 The command line should contain called program,source file and target file.You should follow the following command line structure to input your DOS commands.

htmltools.exe is the called program.

www.verypdf.com is the source file and htmltools.exe will search for the webpage via Internet and download the information on the page.

output.bmp is the target file—picture.Here we take bmp format as an example. 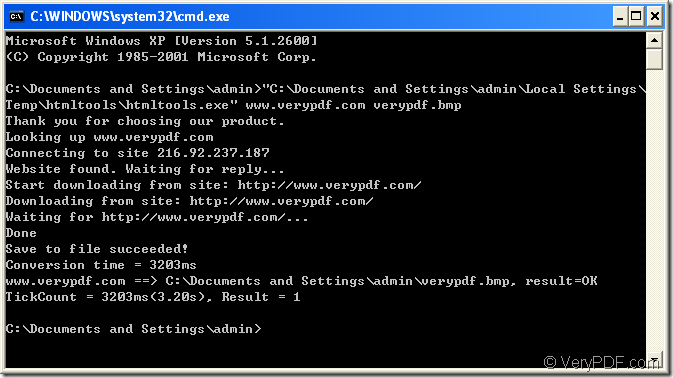 "C:\Documents and Settings\admin\Local Settings\Temp\htmltools\htmltools.exe"  is the path of htmltools.exe which you can drag in cmd.exe directly.

www.verypdf.com   is the URL of webpage.

verypdf.bmp  is the name of target file.

The target file will be found in current directory.If you want it saved in the location you like,you can specify the path for target file in command line.