CIN is the image format created by Kodak's Cineon film system. It can transfer film images to a digital format for electronic compositing, manipulation and enhancement. Then outputs back to film with no loss of image quality. With the help of docPrint Document Converter Professional which is also named as docPrint Pro, you can convert MS Office Excel document of xls to cin or xlsx to cin easily and swiftly only by some mouse clicks.

What should be mentioned here is the virtual printer docPrint is not only a simple Windows printer which can scale the paper size and save ink and time, it is also an excellent document converter which can convert any printable documents to many kinds of image formats. This article aims at showing the way of converting xls to cin with the printer docPrint. But you should download docPrint Pro at https://www.verypdf.com/artprint/docprint_pro_setup.exe to use docPrint.

You can get the acquaintance to the “Save As” dialog box by seeing it in Figure1. 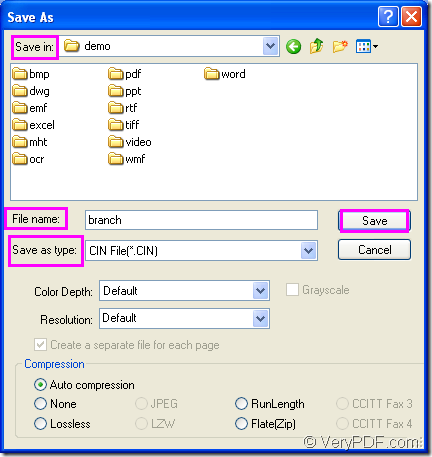 When the conversion from xls to cin is running, you will see a green progress bar at the bottom of the interface of docPrint and the bar will be empty again when the conversion is over. At that time, you can search for the target file in specified location and browse them with some kind of image viewing or editing program.