In the conversion of doc to jng or docx to jng, if you can get the help from docPrint Document Converter Professional, it will be half work and double result.

In this article, you will see how to use the virtual printer—docPrint to convert doc to jng. In fact, docPrint is not only a simple virtual printer, it is also a powerful document printer which can convert any printable document to 50+ graphics, it may be a Microsoft Word file, Adobe PDF file, HTML file, Excel file and others, Document Printer (docPrint) supports various image formats, resolutions and compressions.

So before using docPrint, you should download docPrint Pro at https://www.verypdf.com/artprint/docprint_pro_setup.exe and install it on your computer. The installation process is easy enough.

Then you can convert doc to jng following the steps bellow now.

1. Please run the printer driver first. It will be two kinds of circumstances when you run the printer driver. One is that docPrint is the default printer. You can find the word document and right click on the file to choose “Print” option in dropdown list, which can run docPrint directly. But if docPrint is not the default printer, you have to open the word document and click “File”—“Print” to open “Print” dialog box in which you can choose the current printer as “docPrint” in “Name” combo box. Then click “OK” button. If you don’t like this way, you can also use the hot key “Ctrl”+ “P” to open “Print” dialog box in an opened word document.

2. Then you will see a dialog box called “docPrint” showed in Figure1 in which you can see some function icons and a small dialog box. If you want to convert doc to jng only and don’t want to set any parameters to the target file, you just need to open “Save As” dialog box according to the methods below. 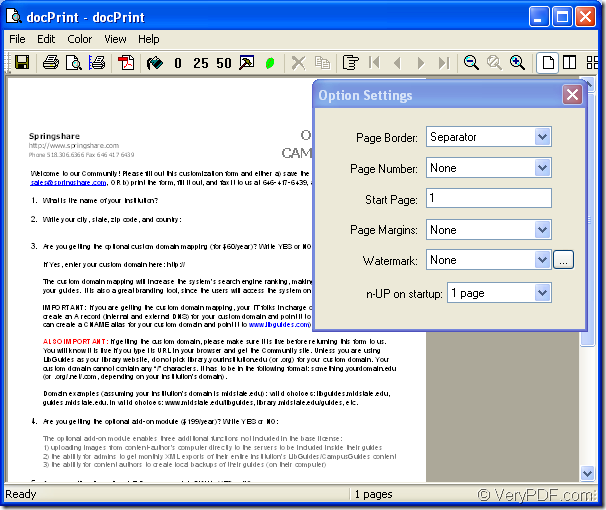 3. In the last dialog box which is named as “Save As”, you should make some changes to the target file to fulfill the the conversion of doc to jng. Please see Figure2. 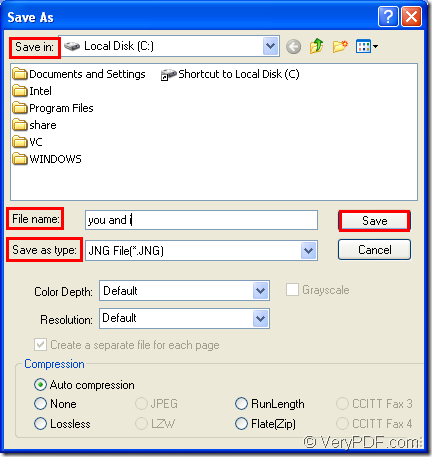 Then the whole process which costs no more than 2 minutes comes to the end. You must have benefited from docPrint Pro because of its simpleness. If you still want to know more about docPrint Pro, please visit its website at https://www.verypdf.com/artprint/index.html.