If you use docPrint Document Converter Professional as your converting tool, you will get more benefit from it.

Three applications are available in docPrint Document Converter Professional which is also called as docPrint Pro for short. They are GUI application which is an expert in batch conversion, command line which can be called in cmd program, virtual printer which contains docPrint and docPrint PDF driver.

You can use docPrint to convert doc to psd or docx to psd with the virtual printer docPrint. docPrint is not only a printer, it is also a document converter, it converts any printable document to 50+ graphics, it may be a Microsoft Word file, Adobe PDF file, HTML file, Excel file and others. docPrint supports various image formats, resolutions and compressions.

If you want to use docPrint, please download docPrint Pro at https://www.verypdf.com/artprint/docprint_pro_setup.exe first. After installing it in your computer, you can see docPrint in the printer list by clicking “Start”—“Printers and Faxes”.

In the conversion of doc to psd, you should run the printer driver first. Please open a word document and click “File”—“Print” to open “Print” dialog box in which you can choose current printer as “docPrint” in “Name” combo box. Then click “OK” button. The dialog box can also be opened by the “Ctrl”+ “P” combination. If docPrint is the default printer, there is no need to open the word document. Just right click on the file and choose “Print” to run docPrint directly.

Then in “docPrint” dialog box, please see Figure1, you should try to open “Save As” dialog box with the following three ways. 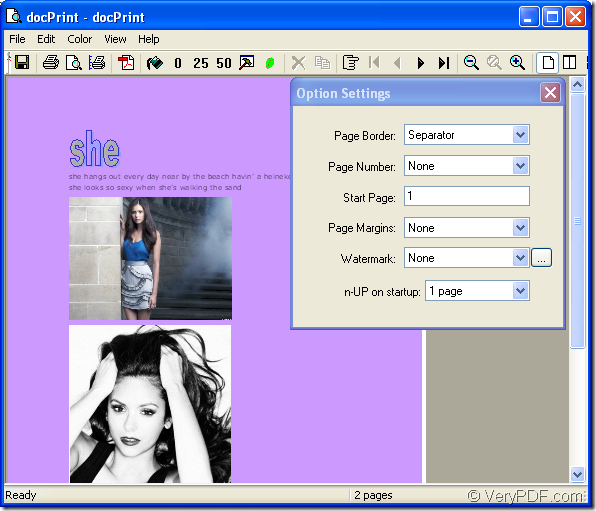 In the next dialog box—“Save As” dialog box showed in Figure2, you have to do following operations to complete the conversion of doc to psd. 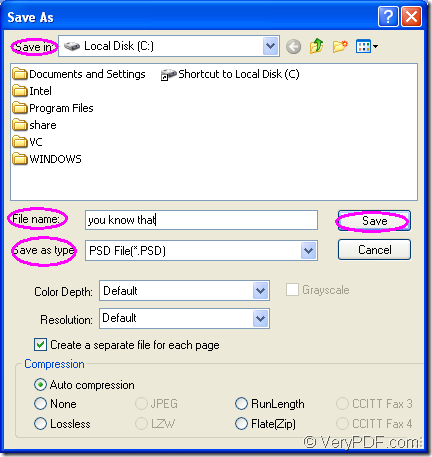 If everything has been done, the conversion will run itself and you will see the output file in specified location several seconds later. To get more information about docPrint Document Converter Professional, please visit https://www.verypdf.com/artprint/index.html.