XPS is a digital file format for storing document data and layout accurately. However, the format is not accepted by many applications, and not easy to be opened on a Linux system computer. You can change an XPS to PDF by VeryPDF PDFcamp Printer because PDF format is relatively more popular. 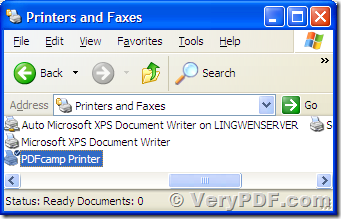 Open the XPS file that you want to convert to PDF, for example, with XPS Viewer in your system. Then select Print in menu File in the window of XPS Viewer as displayed in the following snapshot. You will see a dialog just as you normally print other documents with a printer. In the dialog of selecting printer, please select the destination printer as “PDFcamp Printer”, and then proceed as normal printing tasks. After finishing the operations, your XPS document is saved to PDF by PDFcamp Printer. 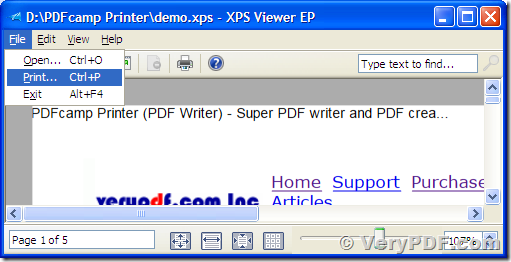 In its installation directory, PDFcamp Printer Pro provides a tool named “BatchPDF.exe” which can run in a GUI or MS-DOS interface mode. However, this tool does not support XPS formats, which cannot make XPS to PDF. You can use this tool for converting other documents to PDF in batches or by command line. For those people who are always busy for processing a mess of documents, the batch mode of “BatchPDF.exe” in GUI may help you much. They can also call the tool from a script to by running the tool in MS-DOS interface.

If you do not need the tool “BatchPDF.exe”, you can by the standard version, PDFcamp Printer, which is a light tool for printing any printable document to PDF, for example, XPS to PDF.