It will be only three steps to convert url to tga and rotate the page at the same time.This article will introduce the steps in detail for you and you will master it in only a few minutes.You will find it will be very easy to do some other conversion by using the same method mentioned in this article.

In Figure1 you can see there are three dialog boxes and four rectangles which can show you the process of rotating the page when converting url to tag clearly. 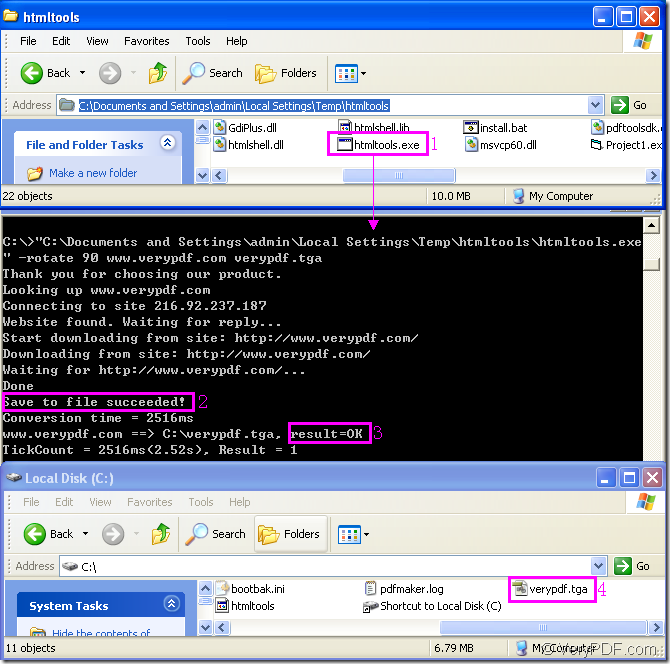 The second dialog box shows the converting platform of the conversion of url to tga—cmd.exe program in which you can input your DOS commands.So you should do the whole conversion here.The way to run cmd.exe program is to click “start” at the left bottom of desktop and click “run” in the popup menu.Input “cmd” in “Run” dialog box and click “OK” button.The hot key “Windows”+ “R” will also realize the same function.The command line contains called program,parameter,source file and target file.The command line the the dialog is

"C:\Documents and Settings\admin\Local Settings\Temp\htmltools\htmltools.exe"  is the path of htmltools.exe.Please don’t worry about inputting a so long path,you can drag the file into cmd.exe dialog box directly like arrow1 shows.

-rotate 90  is the parameter to rotate the page,which means the source file will rotate 90° clockwise.

www.verypdf.com  can be seen as source file.It is the URL of some webpage.You can input any URL you like in the command line to convert it to tga format file.

verypdf.tga  is the name of target file.

The example is written according to the one below,which is the basic structure.You can write your command line like it:

If you want to know more about HTML Converter Command Line,you can visit https://www.verypdf.com/htmltools/htmltools-manual.htm to read its user manual.