TGA  is a  raster graphic file format which is commonly used on PC DOS/Windows systems.  Due to simplicity and ease of implementation and lack of encumbering patents, TGA files are widely used. To convert PowerPoint to TGA  image, you may need a document converter. Here I  strongly recommend you to use VeryPDF docPrint pro to convert PowerPoint to TGA. This article will show you how to do it.

Click “Start” in the left-down corner of the screen and click “Run”. When the Run box pops out, type “cmd” in the add box on the right hand of “Open” before you press “OK”. Then, you will see the DOS box as illustrated in the  following screenshot:

First. find the executable file. You can do as follows: Click “Start” again>>right click the icon of docPrint Document Converter>>select “Properties”, then, you will see the box illustrated as following>>click “Find target”>>click “OK”, then it will go to the target location. 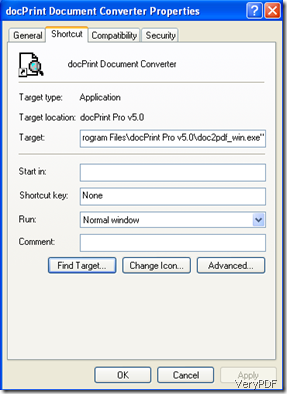 Second, find the executable file “doc2pdf.exe” and drag it to DOS, and you will see the following DOS box as illustrated below:

Step 5: press Enter on the keyboard to start conversion.  After several seconds, you will see the following box, which means the conversion is finished, and the converted TGA image will appear in your computer. 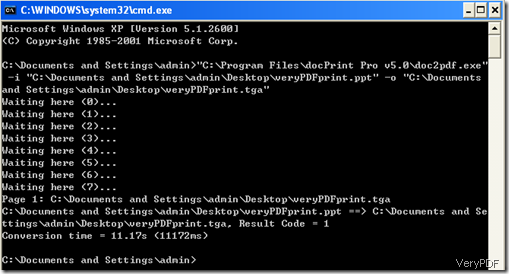