You can rely on a powerful document converter which is named as docPrint when you want to convert MS Office Word document of doc to tga or docx to tga.

If you want to use docPrint, you should download docPrint Pro at https://www.verypdf.com/artprint/docprint_pro_setup.exe and install it on your You can not find it on the disks but in the printer list by clicking “Start”—“Printers and Faxes”. Or you can download the standard version of docPrint which only contains the virtual printer at https://www.verypdf.com/artprint/docprint_setup.exe. After installing docPrint on your computer, you can launch it via the following steps.

You should run the printer driver in the beginning of the conversion of doc to tga. Please open a word document and click “File”—“Print” to open “Print” dialog box. Then choose “docPrint” as current printer in “Name” combo box and click “OK” button. The hot key “Ctrl”+ “P” will also do you a favor to open “Print” dialog box. If docPrint is the default printer, it will be more convenient. Just right click on the word document and choose “Print” option to run docPrint directly.

In “docPrint” dialog box showed in Figure1, you will see the preview of the word document in the window form. There is a small dialog box called “Option Settings” on the right. But if you want to convert doc to tga only without setting any parameters, you don’t need to care about that dialog box. Just use the ways listed below to open “Save As” dialog box. 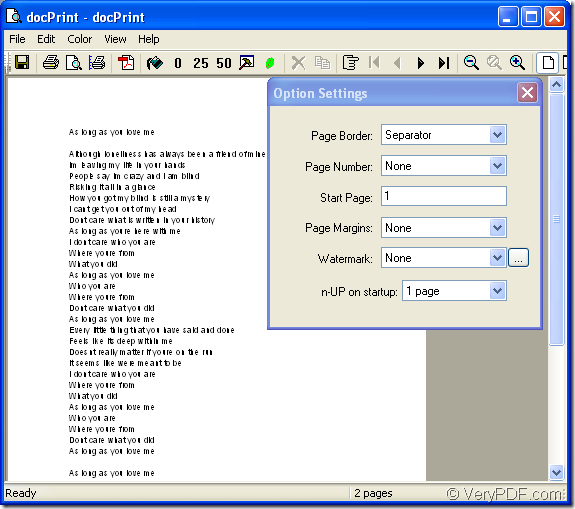 3. Save the output file

In “Save As” dialog box showed in Figure2, you can save your output file via the following operations. 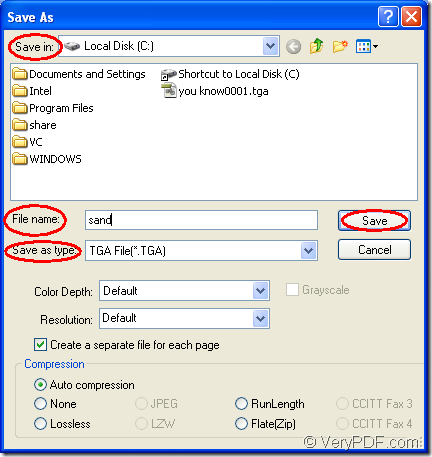 The whole conversion will come to the end in a wink and you will get the target file in the specified directory on your computer. If you still have any question about the conversion of doc to tga or docx to tga, please leave messages. If you want to learn more functions about docPrint, please visit https://www.verypdf.com/artprint/index.html.