DPX format file is kodak raster image format used for transferring film images to a digital medium with no loss of quality. DPX also referred to as a "Digital Moving Picture Exchange Bitmap." The DPX format was originally developed by Kodak, but then was enhanced and published by SMPTE (Society of Motion Picture and Television Engineers), who now maintain the file format. DPX files are similar to .CIN files, the original Kodak format, but they contain additional information in the file header.

You can download docPrint Pro at https://www.verypdf.com/artprint/docprint_pro_setup.exe and when you install it in your computer, the three applications are involved. You can click “Start”—“Printers and Faxes” to see the printer list and you will find there are two added printers named docPrint and docPrint PDF driver which is the other virtual printer of docPrint Pro.

Here are the steps to convert AutoCAD to dpx format file with docPrint for your reference.

If docPrint is the default printer in your computer, you can right click the dwg file you want to convert and choose the option “Print”  to run docPrint. If not, you can open the document and click “File”—“Plot” to open the dialog box “Plot-Model” and choose “docPrint” as the current printer in “Name” combo box of “Printer/Plotter” group box. Then click “OK” button.

Step2. Open “Save As” dialog box

In “docPrint” dialog box showed in Figure1, you don’t need to care about other function icons in the tool bar if you want to convert AutoCAD to dpx only. You just need to open “Save As” dialog box by clicking “File”—“Save as” or clicking the icon

in the toolbar. You can also press “Ctrl”+ “S” on your keyboard at the same time. 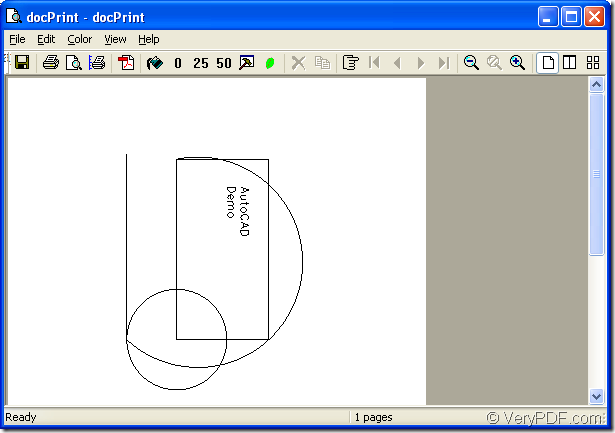 Step3. Save your target file 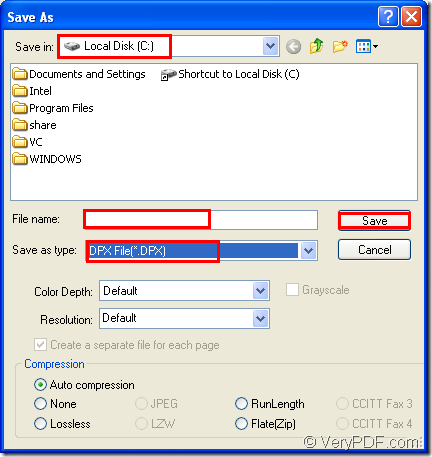 Maybe 10 seconds later, you will get your target file and you can browse it with some image editor or image processing programs such as Photoshop, IrfanView, GSview and so on.