When the command prompt window appears on the computer screen, you can type a command line in the window. The command line syntax below may be helpful if you don’t know what should be included in a command line. The angle brackets are used to enclose essential contents. string refers to character string.

The following is an example which can be used to convert HTM to PDF and edit PDF creator,

Now do you know how to type a command line? After you type the command line, please press “Enter”. The computer will start working right away. You can also view the process information in the command prompt window as illustrated below. When you see “Result=OK”, that means the job is completed.

To check the result, you should right click the icon of the output PDF file, select “Properties” on the menu to open the “Properties” dialog box, > click the “PDF” tab, then you can find “command” after “Application” in the dialog box. You can try the command line application of VeryPDF HTML converter for 50 times. If you want to buy it, please click Purchase. 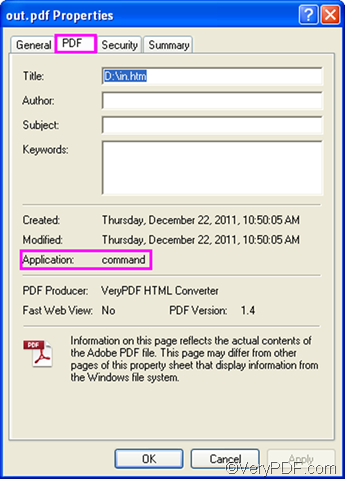