VeryPDF docPrint PDF Driver printer is a virtual printer included in many VeryPDF products like docPrint and PDF camp. You can download the free trial version of the VeryPDF product like docPrint from the following website: www.verypdf.com , and then you can to use docPrint PDF Driver printer to convert Word to PCX image format. Moreover, you can convert any other printable document to files in TIFF, PCX, PNG, PDF, etc. formats. The following is the comparison between the content of a Word document, and the PCX image format. 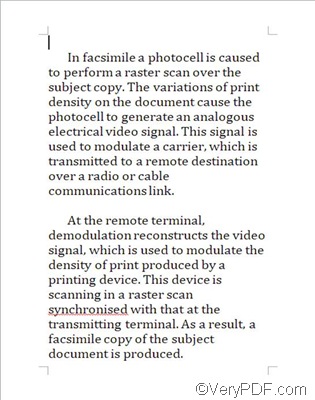 Four steps are enough for you to convert Word to PCX image format via docPrint PDF Driver printer. Please follow the steps and try it by yourself :

1. Open the document you want to convert from Word to PCX in any MS Office application like MS Word 2010. 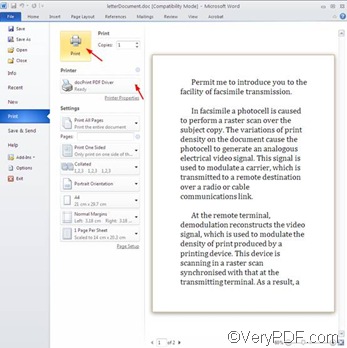 With regard to the [Print] dialog box which might appear on the screen instead of the [Print] interface as illustrated above, you should choose [docPrint PDF Driver] as the printer, and click a button like [OK] to proceed to the next step. 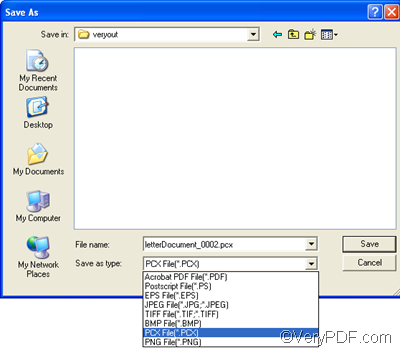 4. When the [Save As] dialog box appears on the computer screen, you should first specify [PCX File (*.PS)] as the output format on the pulling down menu of the [Save as type] combo box; Then, you should select a directory to export the PCX files in the [Save in] combo box and list box; third, type a file name you like for the PCX file in the [File name] edit box; fourth, click on the [Save] button to close the [Save As] dialog box and a little printer icon will appear on the task bar in the right down corner of the screen. When the little printer icon disappears from the task, it means the conversion from Word to PCX is finished.