VeryPDF has offered a Very-Powerful application Document Converter, and it has a standard version named Document Printer. In this article, the author is going to give out some differences between the two applications.

In fact, Document Printer is just a virtual printer supplier for Windows system, which can print any printable document to PDF. After downloading the installer of Document Printer, you can install it and try it for free. After installation, you will see two new virtual printers in your Printers and Faxes list of your Windows system, whose names are docPrint and docPrint PDF Driver.

Use key combination Ctrl+P in Word window, and then comes the print dialog page as displayed in the following snapshot (Figure 1). Select Printer as docPrint PDF Driver, and then press Print. 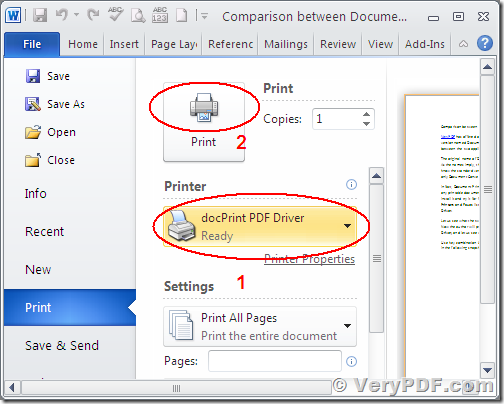 Now we will see a Save As dialog as shown in Figure 2. In the Save as type dropdown box, we can select a target format for printing the Word document to. Oh, you see, it not only support s PDF format, it also can print this Word document to PS (PostScript), EPS, JPEG, TIFF, BMP PCX and PNG. It means that, with virtual printer docPrint PDF Driver, you can convert this Word to PDF or print this Word to JPEG and other image formats.

It is great, isn’t it? Now let us see what docPrint can bring us. Use the same printing process above, but select the target printer as docPrint, then, what will we see? Go to Figure 3. 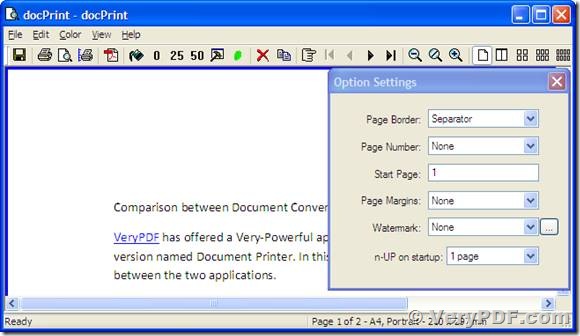 Oh, there comes a docPrint interactive window. In this window, you can adjust the page view and print options before send the current document to the target format file. On the tool bar, you can set the thickness of text for saving ink, or arrange multiple pages in one paper sheet for saving paper. There are more useful functions in this window, you can explore them later. Now let us check what we can do next. 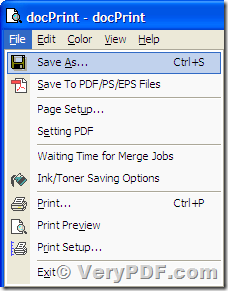 As Figure 4 shows, in the File menu, we select Save As, and then it brings us to a Save As dialog again as displayed in Figure 5. 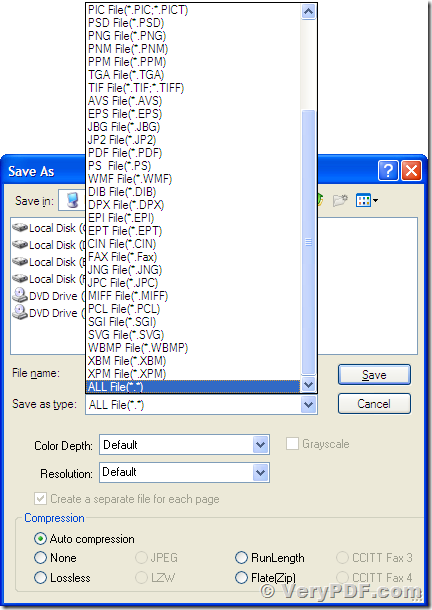 Wow, it supports several dozens of target formats, and it even supports custom Color Depth, Resolution and Compression. The virtual printer docPrint looks much greater than docPrint PDF Driver.

Now let us see how Document Converter works with the additional GUI and CMD interfaces.

The first step is naturally to install Document Converter. You can get the installer here, https://www.verypdf.com/app/document-converter/index.html , and then install it.

Start the GUI from your start menu in your Windows system (the executable is “doc2pdf_win.exe”), and then you will see an interface like Figure 6 shows. 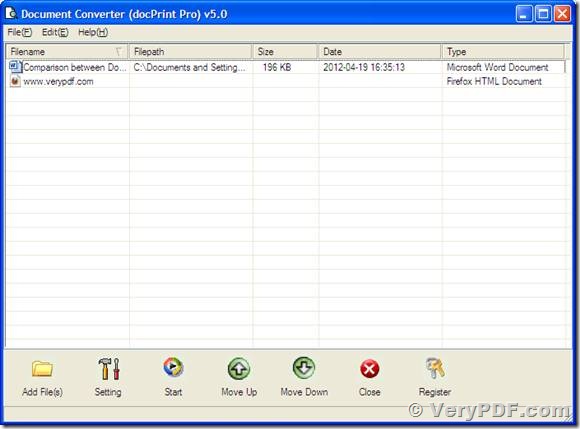 With this GUI, you can convert multiple files of supported formats in batches with sever clicks. It almost supports all the source formats and target formats as the two virtual printers do. You can add HTML, Word, PDF and even webpage address (URL) the process queue and then convert them to other formats with one click. The Setting button is for more settings and you can learn more from these articles.

which converts “in.pdf” to “out.jpg”, from PDF to JPG.

For more use guides and options descriptions, please see the accessory instruction in the executable. You just run the command
doc2pdf <Enter>
in the installation directory and then you will see the instructions printed in the command prompt window.

Generally speaking, Document Printer has two virtual printers, docPrint and docPrint PDF Driver, which can print any printable documents to various supported formats, e.g., JPG to PDF, PNG to PS, etc. Document Converter has additional graphical interface and CMD interface besides the two virtual printers. With the GUI and CMD interface, you can easily convert multiple documents in batch process or control script. For more information about the two products, please visit our website: https://www.verypdf.com/ .

16 Replies to “Comparison between Document Converter and Document Printer”